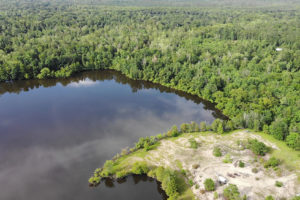 OFF THE BEATEN PATH. Situated in the southwest corner of Pearl...Read More→

During the late 1880’s, a rail line was constructed by the New Orleans Railroad through the region first known as “Pearl County”. This rail line expansion significantly alleviated the regional area’s population growth and economic development, particularly in the timber industry. These developments soon established and re-formed the county under the name which is known today as Pear River County.  This new reconstruction was done using the same original areas taken from Marion and Hancock County on 22nd day of February in 1890. The name of the county originated from the basic fact that it is divided from the state of Louisiana by the Pearl River which makes up the western border of the county.

Northern Organizations later purchased immense size parcels of virgin forest land in the region and with the construction of the rail road coming into play in 1884, it conveyed into dynamic changes. Sawmills from Gainesville, Mississippi, which had used the slow Pearl River for transportation, were moved to Nicholson and other places north along the railroad to speed transportation of their products. A site was chosen for the new county seat which was on the railroad. Since the land was owned by Mr. Jim “Poplar” Smith, the county seat was named Poplarville. The first court house for Pearl River County was built in 1892.

The same year, a boarding school was also built in Poplarville which was the largest of any similar institution in the state. In 1923 Pearl River Junior College was established and soon became one of the most prominent junior colleges in the United States. During the arrival of World War I, the region was filled with sawmills, resulting in fortunes being made in the forestry & timber industries. Although there was a severe slow-down caused by the Great Depression during the 1930’s, World War II eventually brought back high demand for lumber, timber, and other forest products.

The county has a total area of around 820 square miles, that of which 811 square miles is land and the remaining 9 square miles is water, and the population recorded in the 2014 census was 55,224 in the county.  Furthermore, the neighboring counties and parishes are the following: Lamar County (north), Forrest County (northeast), Stone County (east), Hancock County (south), St. Tammany Parish, LA (southwest), Washington Parish, LA (west), and Marion County (northwest).  The major communities in the county and surrounding area consist of the following: Picayune, Poplarville, Caesar, Carriere, Crossroads, and Henleyfield.